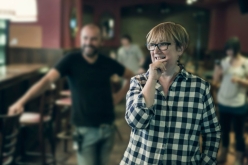 Helena Taberna is true to her principles: a commitment to feminism right from the start, an awareness in favour of Basqueness from her native Navarre and the will to reach the public from her author identity, a capacity to combine gentleness with strength. It was courageous of her to embark on Yoyes (2000). She was wise in giving prominence to the faces of female immigrants in Extranjeras (2003). She was coherent in returning to Alsasua during the Spanish Civil War [1936-39] with La buena nueva (2008). Nagore (2010) was a feminist and therefore humanistic statement, which is turning out to be an issue of growing relevance. And Acantilado (2016) was a meander to revisit some of her concerns as a creator. The movies she will be signing in the future are set to repeat the ever-present themes of this retrospective of her work: courage, marksmanship, coherence, humanism.