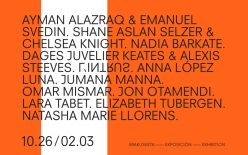 Some believe that organ rejection consists, literally, in vomiting up the heart and spitting it out: after all, the word rejection seems chosen to convey this. But that isn’t the case: rather, it is a matter of what in the intrusion of the intrus is intolerable—and this is very soon mortal if it is not treated.

L’intrus is an exhibition about how difficult it is to make an ethical and complex picture of the stranger. The stranger is someone that “the community” cannot see clearly. The stranger is the one who, by their presence, challenges the natural assumptions of the place in which they are strange. There is danger in trying to show them: to make a picture of the stranger is to identify them as a stranger. Such representations have the effect of reducing their subjects to a keyword.  They become symbols of their other-ness to “us.”

Europe is in the middle of a migrant crisis that is testing the limits of its universalism along with its ability to see humanity in all human beings. The migrant crisis, and phenomena like Brexit that result from it, is a political problem that requires policy change at the national level and local activist and humanitarian action to address physical needs like education, food, durable shelter, etc. But it also requires the work of artists, filmmakers, critics and curators to produce and discuss critically the aesthetic codes that govern how strangers are represented. We need pictures of the stranger that assume the psychological and ideological complexity of all human beings, and especially of those whose difference interferes with our own lives. L’Intrus responds to this imperative.

L’Intrus takes Jean-Luc Nancy’s eponymous book as a point of departure. He pictures the one who is intruding, the stranger, as a transplanted heart. The body, his body, needs the stranger but it is also always in danger of rejecting that stranger and, as a consequence, of dying. The implication of Nancy’s text is this: not only is the stranger already of the social body, the social body depends on their presence and on the fact of their difference.

L’Intrus presents artists who respond to the problem of picturing the stranger without objectifying them by leaning in the direction Nancy indicates, by thinking the relation to the stranger as intimate and vital interdependence.

This exhibition comes from the curating residency developed by Natasha Marie Llorens at Tabakalera during 2017.