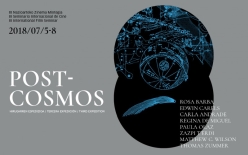 “It was not even now quite dark, the light filtering down in a most extraordinary manner. We opened the provision bag, ate a frugal supper, and each did his best to find a bed amid the pile of stones, dirt, and lava. Presently, after lying quietly for some minutes, I opened my eyes and looked upwards. As I did so I made out a brilliant little dot, at the extremity of this long, gigantic telescope. It was a star without scintillating rays. According to my calculation, it must be Beta in the constellation of the Little Bear. After this little bit of astronomical recreation, I dropped into a sound sleep”.

Journey to the Center of the Earth, Jules Verne.

“The ship came down from space. It came from the stars and the black velocities, and the shining movements, and the silent gulfs of space. It was a new ship; it had fire in its body and men in its metal cells, and it moved with a clean silence, fiery and warm. In it were seventeen men, including a captain. The crowd at the Ohio field had shouted and waved their hands up into the sunlight, and the rocket had bloomed out great flowers of heat and color and run away into space on the third voyage to Mars!”.

A double literary quote is the perfect introduction to this year's international film seminar. The first comes from that great classic of fantasy and adventure literature written by Jules Verne in 1867. In this fragment, the main character is half way along his journey towards the interior of a volcano. He turns around, and the view of the sky is as though he were inside a giant telescope. There, at the highest point, he sees a bright star. The action of turning around and observing the cosmos from far below will be a key theme in this year’s seminar.

The second is from another classic of science fiction literature. It is the opening passage of Ray Bradbury's short story The Third Expedition, which places us in orbit and gives us a glimpse of the Earth from space.

We are going to move between these two vantage points and distances (underground/from above) to observe not only what is distant and unknown, but what is nearest to us. In both cases, we will ask ourselves about the nature of what we see and hear. We will watch the films as though we were going over the Universe with a fine-tooth comb.

We are approaching this year’s seminar as though it were part of an expedition (hence the title), incorporating ideas around travel, adventure, discovery, science, storytelling and fiction. We also incorporate the concept of the cosmos using an image that tries to define the experience that this year’s event is based around: Post-Cosmos.

What is there after the cosmos? Is it possible to image that infinite space? Is that the place where things start again from the beginning? Is it possible to transform this space/time paradox into images and sounds which unfold on a cinema screen?

As with the two previous editions, we are using Tabakalera’s summer exhibition—this year focussing on the artist Rosa Barba—as the starting point. Her body of work, themes, images, texts and sounds have provided inspiration for an intensive four-day programme of films and itineraries. Once again, the focus is on sharing films, texts, processes, audiovisual works, debates and exchanges from one side of the screen to the other.