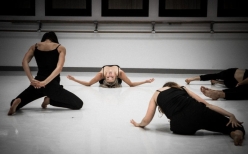 Atalak is a programme of choreographic residencies and performances which gives six artists from the Aquitaine-Euskadi-Navarre Euroregion the opportunity of a one-week residency with the dancers from Dantzaz. The result of their work is subsequently exhibited in various spaces provided for the programme participants.

Atalak is all about research and work in a laboratory format. The initiative channels micro-processes around choreographic creation which bring the public closer to contemporary artistic narratives.

The Atalak 2.0 programme constitutes another step in its commitment to choreographic creation with the incorporation of a new member in Navarre in 2018. This year, Donostia Kultura, CCN Malandain Ballet Biarritz, Dantzagunea, Tabakalera and Azkuna Zentroa are joined by Fundación Baluarte.

From February 5 to 11: Iñaki Azpillaga.

From February 12 to 16: Matxalen Bilbao.

From April 9 to 13: Edu Muruamendiaraz.

From December 3 to 7: Thierry Martínez.