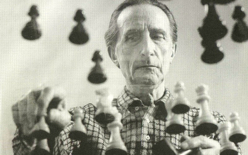 A conference by Maurizio Lazzarato

At this conference within the framework of the Ariketak: la segunda respiración, Lazzarato will present the content of his recently published book about Marcel Duchamp and his rejection of work.

At the beginning of the twentieth century, the artist Marcel Duchamp introduced, by means of what he referred to as "lazy action", the possibility of questioning the ties between artistic exercise and what is meant by production. The questioning of this relationship involves, on the one hand, the undermining of the foundations of the artistic field – but also the introduction of a new ethos for modernity.

Attacking the foundations of work and artwork, Duchamp attempts to bring about a transformation of subjectivity, deploying novel techniques and exercises with which to inhabit time.

The conference, in French with simultaneous translation into Basque language and Spanish, can be followed via streaming here.