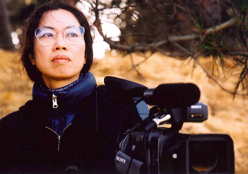 If this text were like Trinh T. Minh-ha’s films, it could probably start with two blank lines, followed by a series of question marks. It would proceed with a polyphonic discourse, composed of different voices in several languages and with diverse accents. Some sentences would be written from right to left, with intentional spelling errors, and meanings as ambiguous as suggestive. This polemic filmmaker, who was born in Vietnam and has lived in the United States for four decades, breaks radically with the rules of film language and disrupts all the conventions of documentary cinema, prompting simultaneously a profound questioning of the anthropological gaze and the classic methods of visually representing other cultures.

Since the early 1980s, Trinh T. Minh-ha has made a series of film essays, overtly subjective audiovisual ethnographies, in places as varied as Senegal, Burkina Faso, Togo, Mali, Vietnam, China and Japan. Her work has been awarded numerous international prizes, and enjoys a cult-following among certain film circles. In addition to her career as a director, she flourished in academia: she is a researcher at the University of California, Berkeley, and has been invited as a visiting professor in various universities around the world. She is the author of several books that address subjects such as gender, power, ritual, representation, film theory, and cultural politics in the postcolonial or neocolonial era. Without a doubt, she is one of the most interesting and controversial figures in critical thinking and contemporary visual counter-culture.