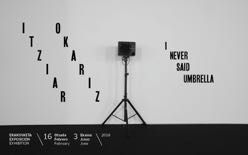 Itziar Okariz (San Sebastian, 1965) is a sculptor who works through text, images and voice on aspects linked to the politics of the representation of the body and to the production of space (as the stage for this representation), re-signifying forms of architecture and urbanism. Her artistic practice often takes as objects of study questions relegated to a secondary level of reflection by those doctrines characteristic of Western thought that have placed the emphasis on the abstract and the incorporeal. An approach based on the materiality of the language, the relationship between body and sculpture and the reinterpretations to which she subjects her pieces in each new presentation are lines of work that run through this exhibition in the rooms of Tabakalera. I Never Said Umbrella brings together previous works by the artist with recent pieces produced in the context of this exhibition.

Among the sources and references present in her work are names from the fields of literature and feminist thought, but also from music and the language of film. In recent years, her work has also involved forms of transmission and art pedagogies through workshops she has conducted in collaboration with other artists, such as the one held last summer in Tabakalera with Jon Mikel Euba and the Kalostra experimental school project.

This exhibition is the conclusion of a cycle of exhibitions based on the work produced by the artist which began at the Kunsthausbaselland (Basel) in March 2017.