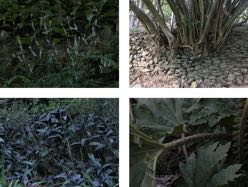 The starting point of this project is the collaboration of Gerard Ortín and Irati Gorostidi (local artists) with Lara Khaldi and Yazan Khalili (artists based in Ramallah) which share a common framework and way of understanding their practices as well as a mutual admiration. Their work have already been put into dialogue in previous collaborations and encounters.

This collaborative work is structured around the representation of the territory, the border and the relationship between identity and landscape, concepts that connect some of the fundamental issues that the four artists have developed in their respective practices.

Although the formalization of the project its open to incorporate contingencies arising during the encounter, its starting point will be a photographic/cinematographic approach that will incorporate a critical review of those media and the implicit colonial/invasive perspective in the will to capture the landscape, that is to say, the will to reach it and, ultimately, to take it over. This logic extends to the questioning of production and reception devices of artistic practices in a broader sense that relates to the exhibition space itself and the borders that it sets.