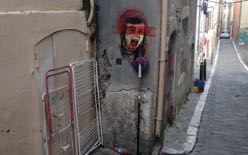 Some believe that organ rejection consists, literally, in vomiting up the heart and spitting it out: after all, the word rejection seems chosen to convey this. But that isn’t the case: rather, it is a matter of what in the intrusion of the intrus is intolerable—and this is very soon mortal if it is not treated.

The residency will allow time to research the local context for an exhibition centered on the intruder, the stranger, the one who enters without the right but whom it is ethically inadmissable to exclude, an idea that I borrow from Jean-Luc Nancy’s eponymous essay. His text is useful in the middle of a global migrant crisis because it argues that the rejection of otherness begins with a delusional wish to be self-present, to be entirely one’s own man. This is a wish to owe nothing to anyone—not to the colonies and the violence that made them so profitable, not to the women who work without equal recognition, not to the migrant labour system that keeps the hardest, dirtiest work off paper and in the dark.

Both the eventual exhibition and the research to be conducted during the fall 2017 at Tabakalera are proposed under the assumption that art can respond to this crisis by representing it as the rejection of one part of the social body by another part of that same social body, rather than by reifying the Otherness of those excluded.