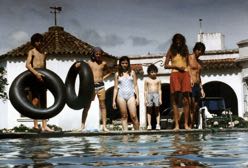 This Focus could be called “Waiting for Zama”. Because it has been almost ten years since the last film by Lucrecia Martel. During this time, she went from being a young, little-known director who surprised Berlin with her directorial début -and established a new line to be followed in Argentine cinema-, to becoming a cult director with her own signature style in the international independent film circuit.

The third week of January will see the launch of her fourth feature-length film, Zama, an adaptation of the novel of the same name by Antonio di Benedetto. The event of watching one of her films again on the big screen makes us, here at Tabakalera, want to review her previous work. This could be the title of this retrospective: “Upstream, images and sounds in the work of Lucrecia Martel”. Revisiting her work to surprise ourselves again with her personal way of making films.

Surrendering ourselves to her films. Getting carried away by her influence, from the beginning, now that her presence and signature on worldwide cinema is undeniable.

How did it all start? This is the question we often ask ourselves when reviewing the work by great directors. What happened before? How did her particular approach take shape? And the way she works with sound? And above all: What happens to us within if we re-watch, or discover for the first time on the big screen, all of her films?

Since the beginning, her work has premièred at the world’s most important film festivals: Cannes, Berlin, Venice, Toronto, New York, Sundance and Rotterdam, among others. Her work has also been reviewed at the world's most prestigious cinemas and institutions: from Harvard to the Tate in London. Now it is arriving in our cinema at Tabakalera.

On the one hand this spotlight consists of a review of her three previous films: La ciénaga (The Swamp) (2001), La niña santa (The Holy Girl) (2004) and La mujer sin cabeza (The Headless Woman) (2008). Zama (2018) will première on 26 January in commercial cinemas, and the aim of this cycle is to encourage the public, after the review in our cinema, to go to the release of her latest film in the city’s cinemas. Our cycle continues later with the visit by Argentine author Selva Almada, who has recently published a book called El mono en el remolino / Notas del rodaje de Zama, de Lucrecia Martel (The Monkey in the Whirlpool / Notes on the Filming of Zama, by Lucrecia Martel). It will be a reading- conference to learn about her vision of the filming of Zama. We will also screen Años luz (Light Years) (2017), by Argentine director Manuel Abramovich, a documentary that premièred at the Venice Film Festival on the filming of Zama. At the same time, we will dedicate the space of La Pared to review his previous short films.

And we leave for the end of this review the news about the cycle that excites us the most: the visit by Lucrecia Martel, who will be here on Thursday 10 January. We have asked her for a conference-meeting with the audience so she can review the visual and sound imaginary of her career as a film director. We will have the chance to hear about her experience in first person -Martel reviewing her own films- and this is something that we are proud to present to our audience. We have organised both the cycle and the visits in collaboration with the Elías Querejeta Zine-Eskola school.