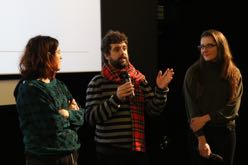 Mañana Goodbye is a series of twelve chapters that look into the change of the productive model through which the old tobacco factory from San Sebastian turned into the current Internacional Center for Contemporary Culture. This transformation process didn’t affect just one generation of workers, wasn’t limited to an specefic type of work, and it didn’t happen just locally. The truth is that it was a multiple change, vague and dispersed in causes as in effects.

The series develops a simple story line. A theatre director receives the request from the new factory to organize a performance with a group of ex-workers of the tobacco factory. What happens then and during twelve chapters intentionally opens to the profusion of motifs and images. Two are the questions that arise: what do we need from the past when we talk about work? How and from where could we talk about memory?

This session is proposed as a closure of the work process begun in February 2015. In the morning we will see the first six chapters and in the afternoon the remaining six. After the screening there will be a conversation with the artists and project collaborators.

The incomprehension of machine

Notes on the first book by Mrs. M (Kindly read by herself)