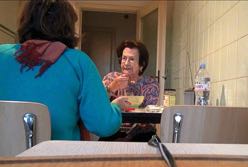 Chantal Akerman, the filmmaker that began blowing up a kitchen in Saute ma ville (1968), concludes filming an apartment in Brussels where her mother will spend her last days. Spaces that restrict, spaces that limit. Although No Home Movie is a film about her mother, a woman that arrived at Belgium from Poland in 1938 running away from the Holocaust, it is also a film about their relationship: “I film to proof that there are no distances anymore” tells Chantal Akerman her mother via Skype 38 years later than she read us her mother’s letters received in New York City during the two years she lived there. A film that echoes other titles by the director and that, after her death, will be part of the history as “the last film by Chantal Akerman”.

Mostra Internacional de Films des Dones de Barcelona (International Women's Film Festival - Barcelona), created in 1993, the festival promotes film directed by women and aims to give visibility to feminine audio-visual culture. The festival is 25 years old this year and Tabakalera is taking the opportunity to invite its programming director, Marta Nieto, to present the festival.

In addition, Anna Solà, Marta Selva and Marta Nieto took part in the first meeting of the Programation Group.