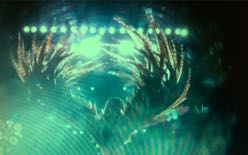 I began Las plumas (The Feathers) by revisiting the piece Kinkan Shonen by Ushio Amagatsu, the performance Organic Honey's Visual Telepathy by Joan Jonas, and the film Notes Towards an African Orestes by Pier Paolo Pasolini –  a series of works with which I can relate, based upon and through the idea of time, a unique present, a common breathing. The realm of actions lies in a set of rituals and images that are ambiguous because of the quality of intimacy that emanates from their content and the relationship with the spectator. What I wanted to work on in Las Plumas consists of very simple actions, like writing and erasing, humming, something done by hand; where the nature –or the disposition towards the nature– that is occupied, or that is aimed to be occupied, is present. There is always regret in those places, but there is also always great calm – after all, mediation is always present there.

This is an attempt to work in an analog time, as if we were on the inside of an hourglass and we were moving about atop that sand that constantly shifts and changes the surface on which we stand. The use of the camera which simultaneously films and provides a live feed changes the context of the happenings – an encounter between the recording of this present and a future meeting with another possible spectator in an attempt at contact.

With: Juan Loriente and Ion Munduate
Camera and editing: Tamara Garcia Iglesias
Artistic assistance: Blanca Calvo
Assisted by the Plastic Arts Grants of the Basque Government's Department for Culture, and by a residency at Tabakalera.
The performance has been developed in collaboration with Tabakalera