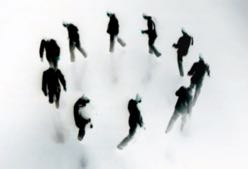 Video-choreographies explores the conditions under which group identity arises spontaneously, or is artificially constructed or imposed. The focus, however, is specifically on those group dynamics based on rhythmic and coordinated movement in time.

Such dynamics in the present day cut across group subjects that include elite sports teams, traditional harvest gatherers on large estates, military personnel carrying out routine exercises ‘shoulder-to-shoulder’, workers in large companies starting their day with compulsory callisthenics, and others.

Based on this idea, Video-choreographies proposes a series of rhythmic, exact and repetitive exercises which invoke the idea of a ‘body’ and a ‘trance’, both in the collective sense. Each element generates a situation which disregards all conceptual dichotomies: strategy will blend with spontaneity, rigid and calculated measure with dangerous rhythms, the echo of folk dances with military movement.

Video-choreographies also combines the ideal ‘writing’ technique of rhythmic movement, whether on paper or directly on the dance floor, with the 'writing’ of real events on video. In other words, choreography is tied to videography as a way of embracing the possible through the planned, and inversely, the planned through the possibilities which arise during the process. What’s important is that both methods of writing are on the same level creatively, and work together on a single and new form of expression.

If writing can be viewed as a creative technique and a tool for memorising specific information, it is also then a technique used to give orders and command from afar, to set and perpetuate the rule.

Video-choreographies therefore demonstrates not only the rule in the movement made, but above all the power that executes the rule. This idea of latent power relations in the movement of choreographed bodies gives new meaning to the notions of a collective ‘body’ and 'trance’.