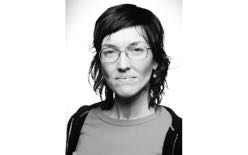 Deborah Stratman (Chicago, 1967) is one of the most prestigious artists in the world of cinema today. Her work straddles documentary, film-essay, the experimental and revisiting archive and historical materials. Her works have been exhibited at centres such as MoMA, Centre Pompidou, the Whitney Biennial or at festivals such as Rotterdam, Berlin, Sundance and San Sebastian, where her last film, The Illinois Parables, world-premiered in the Zabaltegi Tabakalera section.

Stratman is, at present, Associate Professor at the University of Illinois Art School. We could say that she is a total film artist, since she directs, shoots, edits and elaborates the sound tracks to her own films. Among her influences, she herself always cites Jean Rouch, Straub-Huillet, Agnes Varda or Robert Nelson, among others.

This focus on her work is a collaboration / carte blanche to the Filmadrid festival, and allowed us to know better her work and meet her personally.