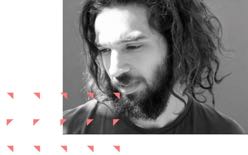 Nicolás Pereda (b. Mexico, 1982) burst onto the international scene as one of those exceptional figures that appear every once in a while, causing surprise, heralding the discovery of something truly new, worthy of praise and hope, because of a very special and powerful way of approaching cinema. The classic distinction between fiction and documentary has to be cast aside for the definition of his work.

Pereda dabbles with a hybrid between both, throwing all notion of category out of the window, where what matters is experimentation and total narrative freedom. It is also pointless to attempt any distinction between actors and actresses, because, as we shall see in the Season, Pereda has put together over the years a body of work in which there is no distinction between interpretation in front the camera and behind it. His naturalism is pure life, a thorough lesson in how to make film with a minimum of resources.

In 2010, his film El verano de Goliat (Summer of Goliath) won the Orizzonti award for Best Film at Venice and ever since his films have been screened at the best festivals around the world: Cannes, Venice, Rotterdam, FIDMarseille, Viena… Nicolás Pereda currently lives and works between Mexico, Canada and the USA, combining filmmaking and teaching, directing, as he also does, the filmmaking program at the School of Arts of the University of New Jersey.