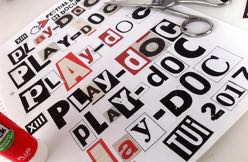 Tui, on the banks of the Miño river, on the border with Portugal, barely 16,000 inhabitants, but one of the signature works of independent documentary filmmaking. One of those works that show that if things are well done - with sound criteria and elegance – concerns, however small and “local”, are all the more universal. Perhaps, we can go so far as to say, interstellar, given that this festival has been chosen by the Best Fest Film Series association of New York as one of the 10 most interesting events on the world documentary cinema calendar.

It was born in 2005, with the intention of creating a meeting point for viewing and reflecting on international non-fiction cinema. And also as a meeting point for the New Galician cinema. Throughout its 13 editions, it has become a place where you simply have to be. "You have to go to Tui, you have to go to Play-doc", we were told when we started doing our programming. So we went. And we went back. And now, at last, we have decided to bring them to Tabakalera so they can, in turn, bring their festival to us.

As we did this year with the Rotterdam-Live festival which gave us the opportunity to "be" in Rotterdam without moving from our movie theatre, we propose displacement to the border of the lower Miño. Quadruple Carte blanche for Play-doc: a classic from past editions, a short from the section on Galician cinema, a premiere of this year's edition and a film by Canadian filmmaker Dominic Gagnon, one of the directors to whom Play Doc this year dedicates a retrospective.

With the presence of Sara García and Anxo Sánchez, directors of the festival.