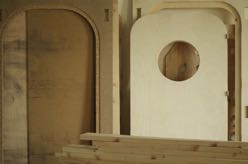 The call for residencies for 2017 has been awarded

Of the 423 proposals received, 11 were selected within the framework of the 4 calls published. They are promoted from the Artist's space of Tabakalera, which sets out to support the professionalization of artists and/or cultural agents.

In the first three calls the jury was made up of Lara Almarcegui (artist), Itziar Okariz (artist), Alba Colomo (curator) and Ane Rodríguez Armendariz (Cultural Director of Tabakalera).

Residence for the development of an artistic project

For application in 2017, in the first modality the projects Temple of Doom and Soft Ground, Hard Light were selected, to be developed by Jorge Núñez (Santurtzi, Biscay) and Bernd Behr (England) respectively.

The residencies will last between four and eight weeks (from March to June and October to December 2017).

Residence for the development of a collaboration project

This call aims to give an opportunity to an artist/agent who works in the Basque context to invite another artist from outside that context to a residence to develop and artistic project, regardless of the discipline.

For application in 2017, the following have been selected: the artists Irati Gorostidi (Valle de Egües, Navarre) and Gerard Ortín (Barcelona), who will work with Lara Khaldi and Yazan Khalili (Palestine), and Itxaso Díaz (Gallarta, Biscay), who will develop her project together with Cai Tomos (Wales).

The residences will last between four and eight weeks (from March to June and October to December 2017).

Residence for the development of a curating project

This call aims to support curators in the development of a project that will be carried out in the exhibition room of Tabakalera in autumn 2018.

One of the proposals selected is the exhibition project on Darcy Lange, carried out by Mercedes Vicente Zancas and Tractora (an artists’ cooperative in Bizkaia dedicated to the production of artistic projects).

Also within the framework of this call the exhibition project L’intrus will be carried out, the creation of Natasha Marie Lloren (France).

The residencies will last one month each (from March to June and October to December 2017).

Residence for the development of artistic research. A collaboration between DSS2016EU and Tabakalera

This call sets out to support research processes in projects that integrate society and citizens through contemporary artistic practices.

Mugak/Fronteras by Maite Garbayo Maeztu (Vitoria-Gasteiz) has been selected in this modality.

The residence will last one year and will include a three-month stay in Tabakalera. The research process will also generate a programme of open activities to be held in 2017.

These calls have an international nature but they also aim to strengthen the local art scene, encouraging a diversity of disciplines, across-the-board practices, collaborative projects and production processes.

They are promoted from the Artist's space of Tabakalera, which sets out to support the professionalization of artists and/or cultural agents. To do this, the space provides resources for artistic creation (spaces, technical and human resources, residence programmes) and a programme of support and visualisation of artistic practices, as well as offering information and advice on administrative matters, grants and external calls for projects.

In response to the calls, in 2016 more than 420 applications were received from local, national and international artists/agents. Overall, both in the residences and through the cession of space and resources, the Artist's space of Tabakalera welcomed 65 artists and cultural agents.