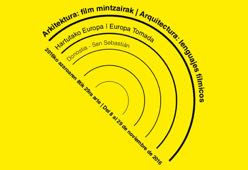 Architecture: film languages is an annual season of lectures, screenings and workshops aimed at investigating one of the most important themes of our time, the city. Together with others issues such as migration, economics, austerity, inequality, climate change, etc., this has become so vast and unmanageable a subject that, as Saskia Sassen says, we are incapable of taking in all the negativity that is occurring. For some years, this programme has been organising a series of discussions with local and international thinkers (accompanied by screenings of films proposed by the speakers themselves), intended to foster reflection on urban policies and territorial/geographical analysis.

This year we begin our deliberations with Julio Cortázar’s short story House Taken Over, in which Irene and her brother feel that the family house is being invaded by forces they cannot see. Although they cannot establish the nature of these entities, the siblings are nonetheless eventually forced out of their home by them. The protagonists are gradually gripped by an increasing fear and anxiety – sentiments which have multiple parallels in today’s Europe – a space in which certain rights, guarantees and procedures ensuring a horizon of tranquillity were taken for granted is now under serious threat from a range of forces. Unlike Cortázar's story, however, these entities are identifiable and perceptible by the light of day. They are the spectres that populate our TV news, politics, literature, art and the thinking of the last two decades. They are the neo-liberal policies of austerity and precarity and the predatory trend instituted following “Operation Crisis”, which has gone hand in hand with the spread of economic totalitarianism. It is the international security control that has been raised against migration; the armour-plating of Europe’s immune system against a violent obverse face in the form of war and terrorism, which has awoken a racist and colonial undercurrent in the continent. It is also the expulsion of families and entire populations from their territories as a result of ecological catastrophe, the construction of new infrastructures and the mass drive of tourist flows and processes of economic restructuring. All of these forces take hold of the territory, either to re-produce and capitalise on it or to destroy it. Displacement, eviction, expulsion, relocation and the subsequent search for asylum are all imminent, given the evidence that our home –that Europe on which it was possible to project a supranational political experience – has been “taken over”.

Using film analysis and working symposia, Architecture: film languages highlights the relevance of studying not only these economic and political processes that are “taking over Europe”, but also the symbolic, anthropological and aesthetic processes; because the changes that occur between what is visible and what is not visible, under the conditions of possibility that determine what is imaginable and what is not, are fundamental for any analysis of the present and for any project inspired by a certain aspiration to transform the current situation.

One of the decisive aspects of the current regime of visuality is that the subjects act in the way they do, not because they are unaware of a given reality; rather, although they know full well the basic configuration of the problems, they act as if they did not. When something is too traumatic, we refuse to accept it as reality. And this process is sustained by certain fantasmatic coordinates, by a process of concealment, the production of representations, practices and senses, whose function is to legitimise power relations.

Thus, as Miller and Yúdice have pointed out, cultural policies, which to a large extent regulate the circulation, dissemination and implementation of the predominant perspective, play a dual role: as a means of structuring the state and as a system for structuring lifestyle, i.e., as a bio-political element.

The notion of Europe, and thus of European citizenship, is built on what are termed “European values”: democracy, freedom, tolerance, welfare… all superimposed on the “real” universality of today's globalisation, acting as a “fiction” in which the citizenry, in order to feel part of a gigantic ideological project, seem willing to allow any type of violence against those who (are said to) threaten it, and to accept the increasing precarity of their lives and the reduction, or indeed suppression, of the rights and values they claim to defend.

This process of ideological assimilation and uncritical acceptance of a set of preconceived notions, enshrined as European values is what bestows citizenship, while the frontiers are charged with defining inclusion or exclusion in a European community that is being erected not only in material, urbanistic and architectural terms, but also through imaginary, symbolic and semiotic processes.

In its procession and circulation of rituals, signs and images, does culture therefore have its own differentiable status beyond culture-as-merchandise or culture-as-the-producer-of-economic-profit? What are the reference points, the regimes of representation, the accounts and the sets of images that make up the present? What relations can we establish between cultural policies, neo-liberal governability and the construction of the territory?

The city is the disputed space where the “integrated” citizenry converges: excluded, marginalised, migrant and precarious individuals, who stand both in areas of non-affiliation and in areas of precariousness and social vulnerability (Robert Castel). It is the space where that inequality amasses and is confronted. On the one hand, because it is where globalised capital, in its “urban moment”, becomes politically and socially concrete; and on the other, because the city contains a vast agglomeration of the most underprivileged – migrants, the poor, gays and lesbians who find in the city, especially in the large global city, a space in which to become political agents.

For this year's event, we have invited Gabriel Villota, Los Flamencos, Andrés Antebi and Daniel Malet, and Isabell Lorey. With them, we hope to discuss the practices and ideas they want to develop in their different fields to undertake a deliberate exodus that will build spaces of resistance out of which the democracy of the future can be formed – spaces where taking over the house does not entail hostility but rather an opening-up of the space of hospitality.