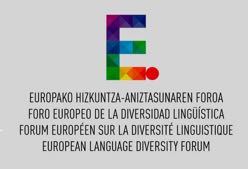 The European Language Diversity Forum will be held in Donostia-San Sebastián in December 2016. The event will gather experts and representatives from organizations working on the defence and revitalization of regional or minority languages. The Forum intends to be a meeting place where civil society organizations, researchers, and public administrators –at local, national state, European, and multilateral levels–, will reflect and discuss on the factors that have an impact on the development of European minority languages, analysing the current difficulties and opportunities for further progress.

The Forum will promote proposals for positive action involving international collaboration, proposals that would help reverse the situation of vulnerability of so many European languages, enabling its development and vitality, now and in the future; specifically, it will focus on already existing tools and initiatives –such as the European Charter for Regional or Minority Languages– and will propose new ones, such as a Protocol to Ensure Language Rights.

With this project the Forum seeks to contribute to the construction “in our region and in Europe [of] a new sustainable model of coexistence and relation between different kinds of people”, which is the central goal in the mission of Donostia-San Sebastian European Capital of Culture 2016. In this sense, linguistic diversity is seen as a key element for the construction of the future European Union.