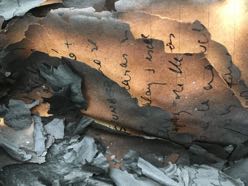 An installation by Andrés Di Tella drawing on the diaries of Ricardo Piglia.

I have the impression I’ve led two lives.
The one written in the notebooks and the one fixed in my memories.
Sometimes when I re-read them, it’s hard to recognise what I’ve lived.
There are episodes set down there that I’d completely forgotten.
They exist in the diary but not in my memory.
Yet at the same time, certain events that endure in my memory
with the vividness of a photograph are absent,
as if I’d never experienced them.”
-Ricardo Piglia

For the first time, writer Ricardo Piglia sets about closely reading his intimate diary, started in 1957 when he was 16 years old. 327 identical notebooks await him, all with black oilskin covers, stored away in 40 cardboard boxes. The record of a life. The diaries are also a time capsule on 50 years of Argentinian history. But the novelist decides to re-write the notebooks: he lends his life to a fictional character and publishes Los diarios de Emilio Renzi. The memory beats the record. The notebooks are burned.

327 cuadernos is a work by filmmaker Andrés Di Tella presented in the Zabaltegi section of the San Sebastian Film Festival in 2015. Today it is also an installation. Cinema breaks its boundaries.

The aim is to highlight the idea of the diary as a collage, myriad potential stories that can be put together at random. All those entering the room can make their own readings, their own associations, creating different stories with the same elements. Thus, the installation incorporates scenes included in the film and others that are not, opening the door to the dreaming up of almost endless scenes from an entire lifetime.

The installation is co-produced by the San Sebastian Festival and Tabakalera as part of the joint Zabaltegi-Tabakalera section.