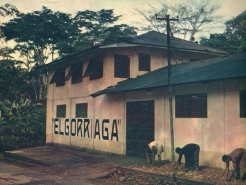 The purpose of this conference framed in the project Stimulants: circulation and euphoria is to offer (in the form of words, images and music) information and elements of reflection on the intersection of two types of relationship among Equatorial Guinea, Spain and the Basque Country: the relationship between their populations and the relationship between their respective products (import and export) with a special focus on stimulants, in particular, cocoa, alcohol and iboga, as well as their very different uses, effects and significances between coloniser and colonised.

The Basques and Catalans played an important role in the Spanish, national-Catholic colonisation of Equatorial Guinea, in the political and economic domination of its population, in the agricultural exploitation of new products in its territory, in the production, export, processing and consumption of Equatorial Guinean cocoa, coffee and timber. And all the chocolate consumed by the Basques, Catalans and Spaniards in Franco’s Spain came mixed with blood and sweat from “that Negro from tropical Africa who sang while he worked”: the unknown origin of the pleasant children’s snacks enjoyed by our parents with “bread and chocolate” was the regime of semi-slavery on the cocoa farms of Guinea.

And yet, “those negroes of Equatorial Guinea” did not grow cocoa or eat chocolate or coffee before their colonial domination. This does not mean that their cultures lacked natural “stimulants” which, for various reasons, the Spanish colonists did not appreciate or import to the metropolis. Topé, banga, cola, alan and iboga are just some of said “stimulants” that have not crossed the borders of Africa or only began to do so in recent decades, as is the case of iboga. One of the objectives of this conference is to reflect on the different uses and meanings of these natural products for natives and Spaniards, on the reasons and absurdities of their very different colonial exploitation and their almost total substitution in native consumption by colonial alcohol.