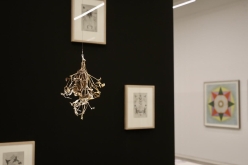 In order to learn more about Emma Kunz's work, we have invited the exhibition curator Yasmin Afschar to give a lecture entitled "Emma Kunz: From Case to Phenomenon. Stages of Reception".

Exhibitions in London, Munich, Hong Kong and Kathmandu celebrate the rediscovery of Emma Kunz (1892-1963). And, as brought to the forefront by the exhibition “Emma Kunz Cosmos”, numerous contemporary artists engage with her work. “A time will come when my pictures will be understood,” Kunz is alleged to have said. The time, it seems, has come. The legacy of this Swiss healer, researcher, and artist is felt to be more topical than ever,
apparently confirming her best-known prediction: “My visual work is made for the twenty- first century!”
But what led to this posthumous success story? What set the course for Kunz’s development from a local Swiss “case” to an international  “phenomenon”? From the “Outside” to the “Inside”? Where and by whom was she discovered, ten years after her death, and in which contexts was her oeuvre discussed over the subsequent decades? The talk gives an overview of the changing conditions of her reception retracing the Emma Kunz phenomenon from its beginnings until today. We hear how Emma Kunz went from being an outsider figure in the 1970s to first becoming an artists’-artist and then, in the 21st century, an iconic figure in the context of an expanded concept of art. Today, she is also an example for the feminist-driven
reorientation of art history towards its margins, as well as a potential historical reference for current post-humanist and holistic approaches.

Afterwards, Miriam Isasi, guest artist at the exhibition, will give the lecture "Liquid Herbarium".

I am not a biologist, nor a botanist, nor even a witch. But from Art I understand herbariums as a place of observation and the landscape as a space for listening. In my talk at Tabakalera, I will raise the idea of collection based cartography. I will introduce some of my projects in which I have worked with protected, invasive, medicinal and magical plants.  Using alchemy as a methodology of transformation and popular mythology as a starting point.

Both lectures will be translated into Spanish and English.