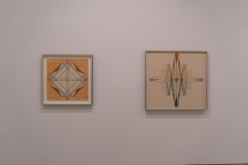 From Its Non-Site Of Unsettled History, Mediumistic Art Lets Us Know That The Spiritual Has Become Abject. Lars Bang Larsen

Cosmos Emma Kunz joins an array of exhibitions that since the mid-1980s have addressed modernity’s relation to ’spirituality’ and the occult. The stakes in the reception of nineteenth and twentieth century mediumistic art continue to be high, because it can address our need for authenticity in art through an unmooring of canonical arrangements – including the sexism that has tainted the history of avant-garde art and politics.

In unexpected and sometimes confusing ways, mediumism haunts the ways in which we organize being, society and thinking. On the one hand the work of mediumistic artists and collectives has been characterised by (often misrecognised) progressive agency that give new meanings to the concept of the spiritual. On the other hand, the occult has an opportunistic relation to reason that can be misused politically. Already in the 1930s Walter Benjamin talked about the necessity of exploring “occult, surrealistic, phantasmagoric gifts and phenomena” through a “dialectical intertwinement”, in order to avoid romanticism – and, we can add, a lapse into fascism.