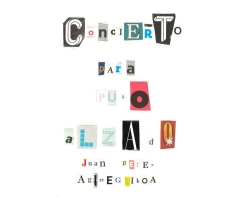 Sound installation by Juan Pérez Agirregoikoa in the frame of the project Scala.

This installation brings together a series of songs recorded with the Ochote Ozenki choir. Following the precise instructions given by the artist, this traditional formation comprised of eight voices introduces lyrics from texts by different French philosophers that have been structured as popular songs such as El menú, Beti eskamak kentzen, Ume eder bat, and Viva Aragón.

This combination of elements seems strange at first yet serves as a strategy meant to reveal the foundations that authority has always laid to establish their values without drawing attention. The artist has written lyrics based on texts by Guy Lardreau, Jacques Fradin, Gilles Grelet, and Jacques Lacan that are used to reflect on the relationship between subject and language, the economy and our desires, revolutionary energy and an intriguing yet seemingly condemned return to order. The piece’s adaptation to the Scala space, and consecutive production of a fanzine in the form of a song book, is a step forward in its presentation and public reception.