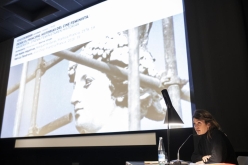 An uninterrupted traveling shot seen from the inside of a car. From the end of a night till dawn, from the Bastille to the Champs-Élysées—by way of the boulevard des Italiens, avenue de l'Opéra, and rue de Rivoli—a depopulated Paris offers itself to Marguerite Duras' voice. In Les mains négatives, Duras creates a literature beyond the book, where the boundary between fiction and documentation becomes obsolete.

During a workshop on the theme of love, Alice Diop met four young men all from the Seine-Saint-Denis district. She recorded their conversations and then found herself wanting to make a movie from those voices. Towards tenderness is an intimate exploration of a masculine territory in a French suburb. Following the coming and goings of these men, we sink into a universe where female bodies are nothing more than ghostly and virtual silhouettes.

She has a PhD in Visual Arts from Sorbonne Université. She holds a degree in Humanities, specialising in Contemporary Film and Audiovisual Studies at the Universitat Pompeu Fabra and in the Design of Cultural Projects at the Université Sorbonne Nouvelle. Since February 2020, she is the Head of Programming, Exhibitions and Educational Services at Filmoteca de Catalunya. In Paris, she was a professor at the Faculté des Lettres of the Sorbonne and has worked at the Department of Artistic Projects of the Jeu de Paume, where she curated a number of film seasons between 2013 and 2018 as well as the video installations exhibition Omer Fast. Le present continue. In Barcelona, she has worked with the CCCB (Centre of Contemporary Culture of Barcelona), the EUROM (The European Observatory on Memories), the Open City Thinking Biennale, the ICUB (Institute of Culture of Barcelona), the Loop festival and the “la Caixa” Foundation in the organisation of seminars, exhibitions, film programmes and other cultural events. In 2013 she was awarded the Walter Benjamin International Prize for her essay Usos y abusos de la imagen en el universo audiovisual de la Shoah (published by Documenta Universitària, 2015).