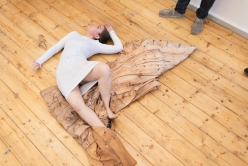 Alvin Lucier's work can be understood as a whole as a continuous investigation on the spatiality of sounds, i.e. on sound waves understood as spatial movement, or even as production of space. Such a specific research in the history of experimental music has nevertheless many implications that go beyond the only sound phenomenon. It supposes in the first place to rethink the relation between space and individual. This lecture will consider the singularity of this renewal at work in Lucier's pieces. The hypothesis defended will be that this experience is in reality an invitation to a process of desubjectivation, i.e. a critical attempt to disassociate oneself from the stratified, historical form of the subject as produced by the political economy to which the composer belonged – and to which we ourselves belong – and which considers the human subject both as a separate entity and as a yardstick by which everything is measured.

A performative presentation of the book Social Dissonance in which some of the basic ideas it contains will be presented, and an attempt will be made to interpret the score found in the book.

A reading from the newly published book Stage of Recovery by the author, artist Georgia Sagri In particular she will read texts wirtten by the artist during the Occupy Wall Street in 2010.