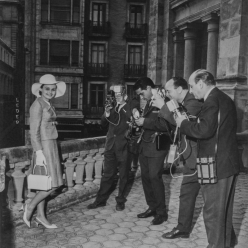 Another way of telling: presences, absences and representations of women at the San Sebastián Festival (1953-1978)

“When we find a photograph meaningful, we are lending it a past and a future”.

Among other things, a film festival is an enormous image production machine. In particular, photography has played a vital role in constructing the imaginary of the great film festivals.

Throughout the 2020-2021 academic year, the research team behind the Zinemaldia 70: all possible stories project, made up of researchers and students from Elías Querejeta Zine Eskola, has analysed the visual history of the San Sebastián Festival based on the photographs kept in the Festival archive and in the Kutxateka collection.

This work has made it possible to analyse in detail the mechanisms to represent (but also to conceal) women throughout the first three decades in the history of the Festival. Traditionally, the presence of women in San Sebastián during these years has been based on a very restricted repertoire of images and discourses, focusing almost exclusively on the presence of actresses on the red carpet.

By taking the work carried out on the photographic legacy of the Festival as a starting point, the aim of this third public conference in the Zinemaldia 70 project is to expand this imaginary and open it up to new critical perspectives. Can layers of meaning be unravelled that go beyond the media fascination with female film stars and their objectification on and off-screen? Can we retrieve from the archive any traces of other women who took part in the Festival while occupying professional positions far from the media spotlight, starting with the first female directors who competed in the Official Selection? Can we, in short, put into practice another way of telling the story of the participation of women in the history of the San Sebastián Festival?

16:00
“Introduction: drifts through the photographic archive of the San Sebastian International Film Festival”

In basque with simultaneous translation.

In basque with simultaneous translation.