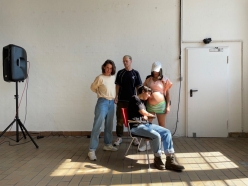 The Performance will last about 90 min and be organized in 2 chapters of 45 min each.

They will be similar but not the same….

INGRID is part fictional figure, part real group member, tragedy, comedy and pathos overlap in her. As in the individual layers of a painting, she is multifaceted and unrhymed. This hospital is a live nude drawing class. It forms a metaphorical space in which the injured body of our collective can be put to the test and put to the test under care.

"Politics are a book of fiction in which the book is our own body" (Preciado).

In the institutional hospital, patients are separated from each other in order to prevent infection. A similar isolation is currently being demonstrated by windows in video chat and web screens.

We do not confront this crisis of care and the commons with autonomy or independence, but with dependence on each other and the audience, the search for healing closeness.

What is the connection between model and draughtsman, is established in the format of nude drawing. We attribute the fictional elements that distinguish the person from the drawing on the paper when viewed from the perspective of the artist, to INGRID. As a fictitious member of our collective, she lives in these very spaces.

For DFS, INGRID is an exemplary character, an exemplary figure, an exemplary life. Born after the defeat in the Spanish Civil War, under the dictatorship of Franco, having some loose relationship to Germany, assuming a German stage name, dying of cancer at the beginning of the 21st century. Addicted to slot-machines, an alcoholic, unsuccessful. Like all of us. The artist Celine Condorelli gives Ingrid her voice, the artist Sofia Lomba makes her come alive for the camera. Ingrid is herself a density, layered, as if in a Max Beckmann painting -- of tragedy, comedy and pathos, multifaceted, lumping incongruities together. Inconsistent. And through her DFS sets to build spaces, for different bodies and narrations to live and exist together, to partake in a dialogue among and alongside each other, to understand this world and imagine another one fully outside of it. Some are dead, some absent, some fictitious and some living ones in love, connected by a silken string, inside an unknown body, inviting poetic desire, warm and soft, always dissolving, never locked, insisting to dust-bathe. Small miracles, performed one by one. De-formance, connecting fragments, never durable, glamorously insisting. Every story is worth being told and retold, crucial, necessary, beautiful, inspiring, magic, diamantic.