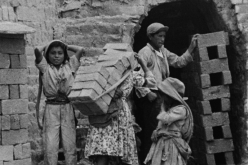 Considered a classic Latin American and Colombian documentary film, Chircales chronicles the search for a film production methodology that could be adapted to the sociopolitical conditions of Latin America. Filming began in 1966 in Tunjuelito, a neighborhood in southern Bogota, where the owners of large farms were renting out their land for artisanal brick production.

Using the framework of “participant observation”, Marta Rodríguez and Jorge Silva integrated themselves into the community of brickmakers and spent five years working closely with the Castañeda family. In the 1960s and 1970s, there were no film schools or documentary production companies in Colombia, and the only tools filmmakers had to show the poetry, violence and exploitation of the Castañeda family were a camera and a tape recorder. In capturing these experiences, they also created a methodology for documentary cinema in conditions of political violence.