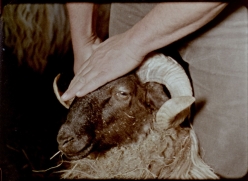 Entrails, a flock of sheep, one spring. The cooing of doves and songs hummed. Some vultures, bones, flowers and many hands. Hands which feed, milk, stroke, shear, film; hands that kill. Hands which inhabit the doubts and contradictions about using other species.

The film Euritan is a review of the narrative Klara eta biok, written by Itxaro Borda in 1985. Pitting the author against the words of her past, it updates her view on the peripheral relationship around the Basque character.

Luisa's washing machine has stopped working. After the initial misfortune this will represent, it will actually become her perfect alibi to slip away from her slow daily routine. To her husband, the absence of the washing machine will become a greater absence, Luisa is not home anymore fulfilling her submissive housewife duties.

*After the screening, filmmakers Arantza Santesteban and Celia Rico will talk about the creative processes of their respective works.