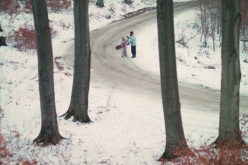 *Presentation and Q&A with Patrick Holzapfel.

The condition of an island marks states of existence and the way one relates to the world. They have physical and ideological borders that separate them from the outside and define their interior territories. An island cannot exist in solitude, although they are shaped by their solitary nature. As an islander, I have found myself in search for such things on more than one occasion. Situations and individuals act as a mirror through which my identity is revealed. In these reflections, I almost always find my memories; demarcated, characterised, and rooted in essences that I sometimes recognise and sometimes do not. Óleo sobre viento, is an evocative short-subject film, a water mirror rippled by the wind where I see not a clear reflection, but rather an image that dissolves the being and space, where upon their being returned, one breaks down borders, islands, and memory. At the same time, it is a reflection on presence and absence.

The film does not associate itself with any concrete time or space. It inhabits a non-place marked by reflections, through which poetry is made and invigorated by the steps of Francisco (the main character) and the howl of the wind over an island covered in olive trees. While the place depicted is marked by a specific event (a town flooding, transforming it into a swamp), this does not occur in the film, instead using it as an invisible force that drives the search and connection with memory. Its mobilising existence is implicit.

The richness of the images is presented in a progressive ascension towards expressionism and abstraction that seeks to sublimate the subject and his environment. In opposition with the permanence of painting, the photography presents an ephemeral image that dissolves in its march forward. The multiple expressive forms are developed in a way that make them appear as though they were drawn by the will of the wind, projecting their presence into the foreground. The reflections’ diluted forms are representative of the fragility of memory and beings, as a philosophical thesis that concludes with the dissolution of man and the landscape. I find a similar perspective in the philosophical thought of José Lezama Lima, the 20th-century Cuban writer. José Lezama Lima considered the subject as nature, which in his viewing is image. For him, this association of the subject being both nature and image at the same time represents the supernatural. In the dawns of the film, this is translated into the mimicking of man and his environment, with the voice being relegated to the lamentations of flamenco song. His vision of insularity is closely related to the supernatural. For him, the condition of an island moves through the light that radiates the solitary subject as he becomes supernatural.

Ultimately, here we find the personal journey of its creator, a return to Andalusia that results in a dream-like state presented in living space. It is a poetic journey towards his own identity, the discovery of presence and absence, and the symbols that distinguish them.

With the personification of aesthetical, emotional and moral experiences shared or aroused by a work of art, one might find a new friend, a similar view of the world, kinship or even fragments of their own self. I like to do that and think of an anthology of poems for example as a circle of great companions. The more varied and impure it is, the more friends there are to learn from. I don’t intend this to be a vague or officious way to talk about taste – and that circle of companions don’t include poems or films that I simply like or are generally right up my alley.

More than a feeling of strong liking, these evoke magnetic relatability. They verbalize or visualize ordinary and foundational yet abstract elements of a personality. BRIEF AUS BRENNBERG, a sincere, moving and deeply poignant, confessional short film by Patrick Holzapfel, is a companion I would be happy to introduce instead of myself. If there was ever a need to explain why I associate patience with the color green, how I remember my youth in the Thüringer Wald and most importantly what I look for in film, I would just show it to anyone.

Because for its twenty-eight minutes runtime, BRIEF AUS BRENNBERG condenses a lot. Through the enigmatic inserts, it is verbal, even dialectic, yet the letter excerpts never truly reveal their meaning to anyone but the addressee. The images are obscure and resist any form of deciphering, yet they add up to a seriously thoughtful whole. Not much to serve an essence-of-place concept, as the title would suggest but to document a genuinely heartfelt and deep longing for the shivery comfort of the woods, an environment for observation, not to isolate oneself from emotional responsibilities but to set the mind free, to use one’s being there to arrive at unforced, involuntary self-examination. A filmmaker of primarily personal preoccupations, Holzapfel doesn’t let his private concerns take his mind off the form. For this self-catalyzed mode of reflection can only be achieved with the reinvention of his approach to the actual execution of this film. And the truly accomplished and precise final work becomes the chronicle of its own making. Quietly and without ever consciously referring to its own importance, BRIEF AUS BRENNBERG displays the liberating power of spontaneity and true independence in filmmaking. Nevertheless, it preserves clarity and precision: the film’s renaissance isn’t rushed, puzzling or stylistically disruptive. With vast depth and feeling, it finds the moderate and earthy beauty of wetness, rough barks and the visibility of breath.

Towards the end of the film, the village takes over and the woods fade into the background. If only Hungarian directors filmed their own villages with such total lack of prejudice, explanatory viewpoints and exoticizing dullness, I’d feel much more at home in Hungary.

Another work of art, that is such companion to me is C.P. Cavafy’s As Much as You Can.

Even if you cannot shape your life as you want it,

at least try this

as much as you can; do not debase it

in the excessive movements and talk.

Do not debase it by taking it,

dragging it often and exposing it

to the daily folly

of relationships and associations,

until it becomes burdensome as an alien life.

During the quarantine, I’ve heard a lot about Rousseau and Schopenhauer and how we now welcome a modest and aimless life. That idea died out pretty quickly. Contrary to most and much like Cavafy, Holzapfel’s creation seems to enjoy a freedom strong enough to overcome the ruling power of the daily folly and the desire for instant appreciation. Its will, if there is any, is certainly mysterious enough to grant the viewer half an hour of freedom for his or her own self as well.