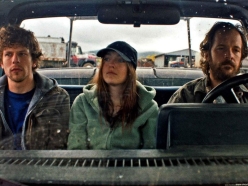 Josh works on an organic farm, one of those that grows based on the seasons and offers local produce and goods. Dena works at a rustic-style spa, one of those with hot pools and naked clients attempting to reconnect with their bodies and spirits. Harmon is an ex-Marine that lives in a caravan on some land in the middle of woods, one of those disordered, somewhat wild garden spaces where lots of things are kept under blue plastic: wood, small boats, old cars...

The film presents these three environmental activists and then shows one of their actions: it’s no longer enough to attend talks on global warming, or recycle and compost at home, oh no. The three militants move from the theoretical to the practical as a way of “correcting” the system. The consequences will be disastrous.

As this is a retrospective on Kelly Reichardt, we must ask a few direct questions about today’s film: What happened with Night Moves? Why is it so different from the director’s other films? Why is it so much more conventional, psychological, clichéd, and superficial?

Making independent film is complicated, and a retrospective should also be used to talk about that. It appears that the director’s fifth film wants to make a leap into the American studio system: its casting turns up emerging talent and well-known industry figures (Jesse Eisenberg and Dakota Fanning); and the narration and structure seem to be much more in line with film that, for example, uses music in a sentimental way and sums up characters with somewhat black and white psychology. Making independent film is complicated, yes, and one could think that this title was an attempt by Kelly Reichardt and her team to move closer towards the commercial realm.

Can we therefore say that this is a failed work of an author-focused career? I would say not, because it is precisely these kinds of films that are also part of the careers of filmmakers that want to continue exploring new territory.

In Night Moves, we do not find the minimalist, stripped-down Reichardt, oh no.

Screenwriter Jon Raymond (texts always by Jon Raymond) said that they wanted to make a film about a fundamentalist without having to create a distant character, instead using someone we could recognise as our own: a friend of a friend, a colleague’s cousin, a neighbour’s brother. From there, starting with the solitary and somewhat tormented Josh character, the film begins adding elements. Yet it seems as though this adding of elements is what does not end up working: as if the film forgot about the small details that are so emblematic of the director, and settled on skimming the surface. As if the film needs to put everything its characters are feeling inside into words. As if this internal landscape were not enough to move the story forward. Essentially, as if the desire to explain too many things were imposed, when there is cinema where this is not required.

Films are an attempt, so it’s always interesting to see how a director resolves all of the questions that arise during a shoot, and despite what’s written in this retrospective text, despite the critical point of view of its title, Reichardt’s style is still there, albeit perhaps a bit more obscured.

Once again Oregon. Once again outdoor landscapes. Once again filming on celluloid. Once again the uprooting and the journey. Once again loneliness. Once again the little character details that appear just once, that we will never hear anything more about: the man that can’t stop walking and is looking for a chat while the sun sets over Lake of the Woods; the boy that lives in the cooperative where Josh works, who keeps watching his pickup truck when he decides to take off forever; the girl and the boy that work at the sporting goods store that closes the film. What happened to them? Why will no one ever make a film about them? All of those characters are part of Reichardt’s imagination, and they are there for us to ask ourselves about their destiny.

I now think of Night Moves as the film where Kelly Reichardt tests out freeing herself from two of her hallmark structural elements: this is the film where the liberating journey disappears. The endless roads and cars are there, yes, but Josh is unable to find calm in the possibility of heading off far away forever. He is paralysed, and cries. He is so destroyed inside that he doesn’t know how to be a fugitive.

Secondly: the humanism that we had seen up till now in all of her work is replaced by the possibility of evil. It’s non-humanism for the first time in one of her films. It’s curious that it is precisely the character that is supposedly connected to the earth that presents the most broken of all the character profiles in her films. Perhaps that’s why the closing credits’ titles begin to roll in a harsh black.

This is a sad film that speaks to various failures.

Final note: the film is dedicated to David Doernberg (1967-2012), production designer for Reichardt’s films and key figure in the independent circuit of the 1980s and 1990s. Doernberg worked on music videos for Sonic Youth, Yo La Tengo, and Superchunk before moving on to film alongside figures such as Hal Hartley, Harmony Korine, Todd Solondz, and Kelly Reichardt.