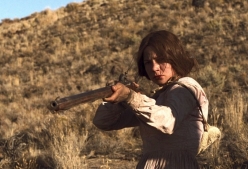 An embroidered handkerchief shows the title of the film and the time in which the story takes place: Oregon, 1845. “Meek’s Cutoff” refers to one of the film’s characters, the guide Stephen Meek, who has been hired by a group of pioneers to take them to the promising Willamette Valley, a new destination for settlers.

The territory and the year refer to that period of history in which the “New America” ​​was still uncharted, and the maps and books only had nameless valleys and mountains and accounts of American Indians defending their land and traditions.

This in a western with all of the characteristics of a film of that genre directed by Kelly Reichardt: it is minimalist but with special attention to detail; it is full of questions, is filmed on celluloid and pays homage to the landscape; and it has a protagonist – Emily, played again by Michelle Williams – who we accompany on the journey.

There are similarities with Reichardt’s earliest films, in which we find small deviations from the main narrative, offering a variety of breaks and flashes of contrast, but this time everything is stripped bare. Three stagecoaches in the middle of a dry landscape and the fear of being lost. Nothing more. And nothing less.

This clearly is a survival film. The first images show the group near a river. Nature and animals are once again a fundamental part of the story: water as a precious commodity and the oxen, horses and the donkey as travelling companions.

Meek represents the prototype of the invading colonist. Meek decides to take a shortcut and they soon find themselves in the middle of nowhere. Meek despises the natives. Meek tells stories of storms, bear attacks, and the battles to the death upon which the legend of the conquerors of the “wild west” is based. Meek despises what he does not understand. Standing against him – and representing the ever-present cultural and humanistic struggle – is the character of Emily. Emily prefers water to blood. Emily prefers trust to suspicion. Emily prefers questions to impositions. Emily observes what is not familiar and, because of this approach, she ends up understanding it. Emily, and the other women in the film, feature in many close-ups, while the epic story of the “white man” is presented in long shots. Measuring the distance from which you film your characters is also an explicit way of writing, as Kelly Reichardt well knows.

And when everything is about to turn to dust, with the group lost on the shores of a salt water lake, when not even the discovery of a gold nugget deposit can change their destiny (“You can’t drink gold”), the character of the Native Indian appears. Meek wants to kill him. Emily convinces the group to be more sympathetic and to listen. Emily knows that if anyone can help them, it is this person who inhabits and knows the territory better than any pioneer manual written in the English language of the time. At this point the film again resembles one of those Kelly Reichardt films where two characters accompany each other: the Native Indian speaking in his language and invoking the ancestral knowledge of that landscape; and Emily speaking first in her language and then listening to the native man’s words and gestures. Until she understands him. Even forcing the rest of the cowboys to change their way of dealing with the world.

Reichardt’s fourth feature film represents a refinement of her style. As if portraying the origins of the birth of a nation also meant going to the origins of cinema: removing, removing and removing, until only the basics are left. She is still accompanied by her usual team: Jon Raymond doing the writing; Todd Haynes in executive production; and in the credits the names of film-makers, such as Peter Hutton and Peggy Ahwesh, to whom the director feels very close. It is precisely the latter director who, in an article about the film, highlighted the peculiar clothing of the three women in it: long pastel-coloured dresses and three hats which, while protecting them from the sun, prevent them from seeing what is around them. And here we find one of the key ideas in this film: it attempts to erase limits and expand the idea of ​​a geographical and personal border in all directions. As we have already seen in Reichardt’s films, it is enough to simply start a journey and observe with attention, care and curiosity what surrounds us in order to begin to understand.

As we are in retrospective mode, it is appropriate to finish by stating that this film anticipates two later films by Kelly Reichardt: the stories of the women who traversed this inhospitable territory of Meek’s Cutoff are the stories that some years later we will hear in Certain Women (2016). And the perfect double programme could be completed with her other film about the origins of the American nation, First Cow (2019).

We therefore now have a map of the Reichardt territory: the points of the landscape begin to relate to each other. We can name valleys and mountains. We can recognise the paths that we have followed and that we will pass through. And there is still half of the journey to go.