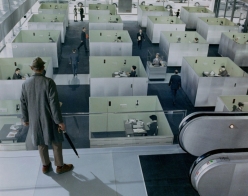 A group of American tourists arrives in Paris to visit the capital. At the same time, Mr. Hulot goes to the offices of a large company for an interview, but ends up lost in the vastness of the building. Throughout his adventures and encounters, Mr. Hulot will find himself in an ultra-modern Paris where his path will inevitably guide him to meet the Americans ...

His fourth feature film released in theaters in 1967 by Jacques Tati was his most ambitious work. It was during the tour of his previous film, Mon Oncle, that the filmmaker had the idea of ​​producing this cheerful and incisive satire that portrays a globalized and superficial society where cultural particularisms and human relationships are increasingly rare. To carry out this extraordinary project, the director chose to shoot in 70mm in a studio that he specially built for this film, the famous "Tativille", which perfectly reproduced the ultramodern architecture of the capital.

The process to finalize PlayTime was extremely long (seven years of production in total) and much more expensive than expected, forcing Tati to mortgage his house and the rights of all his works. Despite the commercial and critical failure of the film at its premiere, PlayTime is today considered the great avant-garde masterpiece of the French burlesque master, praised by both the American David Lynch and the Finn Aki Kaurismäki. Now we have a magnificent opportunity to rediscover it on the big screen and in a magnificent restored 4K version!