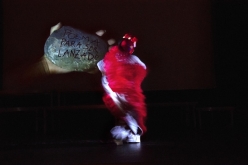 Before Pasolini was assassinated in 1975, he wrote L’articolo delle lucciole. In this work, he considered the similarity between the disappearance of fireflies and the fragility of communities. He predicted the emergence of certain images/fireflies which, using art, would organise different ways of understanding while combatting the blinding light of the capital. Today, we only need to look around to see how the dazzling light of the spectacular governs our lives. The experience of contemporary fascism is that  blinding light.

From this Pasolinian idea delle lucciole came  Luciérnaga (Fireflies): an open, ongoing project bringing together theatrical research, music, dance and film essay. In 2019, following #ChileDespertó, Luciérnaga I (Firefly I) looked at the ravages of the time of neoliberalism. In the piece, a flamenco dancer (a non-filmic character) dialogues on stage with audiovisual archives which constitute dances of neoliberal death.

The darkness in which we live may be the cause of the excessive light of capitalism.

Faced with this blinding light, we need

poetic and environmental images to guide us.

We require lighthouses to light the darkness of the ‘treacherous advisors’ of which Dante wrote in his Inferno.

The world can do nothing while someone sings

narrate
dances
in the darkness.