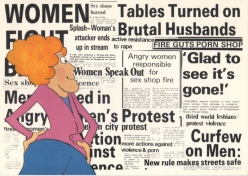 In the Best Interest of The Children, Francees Reid, Elizabeth Stevens and Cathy Zheutlin, EEUU, 1977, 53'

Produced by Iris Films, a feminist film production and distribution company set up in the 1970s in the USA. The piece documents lesbian motherhood and takes an innovative approach to showing the intersection of ethnic and class inequalities. Based on stories from a selection of lesbian mothers and their children.

A documentary about two cleaners, a dinner lady and a lollipop lady highlighting the limited employment opportunities available to British women with families in the early 1980s.

This collective is known for its collaborative animation projects and its often humorous take on discrimination against women. Give Us A Smile looks at the impact of the daily abuse that women experience, from catcalls to physical violence and sexist portrayals in the media. Using quotes from real cases (all the male voices are scripted based on the comments and experiences of the film makers or on real reports), it also illustrates cases of institutional violence involving the police or the legal system. Far from being a depressive film about vulnerable victims, this is a humorous piece that sets out collective feminist strategies.