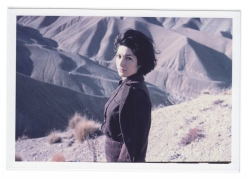 Following, projection of the film Khaneh siah ast, 1962 (The House is Black)

Forugh Farrokhzad’s poetry can be defined in many ways. Basing this definition on her character and her creative world, it could be said, for example, that she was a woman who wanted to be born more than once, a twilight that never ends, a nightingale wounded by history, the cause of her own revolution, a scream in the darkness, a voice awoken from sleep, the danger of the first person, the height of modern Persian poetry, or a lonely woman.

In the Iran of the 1950s, she became the leading light of female consciousness, due to the incomparable strength and sense of rebellion that resonate in her writing, always a  reflection of her free identity.

For this reading, the writer and translator Miren Agur Meabe proposes a selection of poems from Forugh Farrokhzad’s books to illustrate the ideas mentioned above. This will be followed by the screening of the film Khaneh siah ast (The house is black, 1962), a short film that is part of the exhibition ZINE EX. From Abstraction to Algorithm.