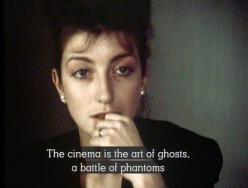 This movie is like an invocation. This movie is like a short treatise on philosophy, history, psychoanalysis, literature, and ghosts. Pascale is called Pascale and she is an anthropology student in university who has stopped attending classes because she has tired of words. "Too many words", she says. And she goes off. "Fuck you. I'm sick of it. I'm selling everything. I'm off. Don't try to find me", Pascale says.

The film will always be remembered for the moment when Pascale Ogier and philosopher Jacques Derrida meet at the Le Select café of Paris to talk about spectres. It could be a sequence out of a Eustache's film, one of those conversations in which life, doubts, and existence take two bodies.

"I'd like to ask you something. Do you believe in ghosts?"

"I don't know. That's a difficult question. Firstly, you’re asking a ghost whether he believes in ghosts."

And then they speak of cinema as the art that allows spectres to return.

Later, it is Derrida who asks Pascale:

"And what about you then? Do you believe in ghosts?"

And she responds as if from beyond.

In this film, Pascale seems to be someone who has returned. From where? It is not clear, but the physical distance is evident. She walks among the ruins of a factory as an apparition. That intermittence of her character accompanies her throughout all the footage. It is an intermittence that also accompanies the plot, which overexposes many ideas as if this were actually a book of philosophical notes rather than a narrative: two young girls, Pascale and Marianne, about whom we hardly know anything, meet and begin a strange physical, mental, and discursive journey.

Ken McMullen is ambitious in his desire to combine cinematographic fiction with essays on myths, memory, cinema, and the presence of the dead. Maybe the mix doesn't quite work, and today it comes to us mostly as a rarity and as an album of great figures who are no longer in this world. But we must admit that the movie took its risks, it tried to mix chapters and materials, and it threw brilliant ideas out there – like the whole sequence in which ghosts are related to electronics. There is some vision in that thesis that talks of a future where the undead relate with each other through electronic waves.

There are more moments that now seem to anticipate "what was to come". Derrida always said that ghosts came from the future and not from the past. Pascale visits the Père-Lachaise Cemetery in Paris to remember the Commune. She speaks with Marianne about the dead combatants, the wall of those shot, the meaning of that fight. It is the cemetery where Pascale's grave is, but then no one was able to imagine that. The film itself thus confirms its own thesis: only cinema is capable of uniting all times – that of the dead and that of the living.

Pascale mixes English and French in her dialogues. One can only begin to imagine the films that she could have filmed outside France. And, finally, Pascale dances. Minute 56: after telling of a tribal legend, Pascale starts something that she calls "the snake dance". A trance that seems to connect the ancient and the modern. A dance that foreshadows the final dance.