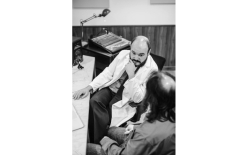 Miguel Álvarez-Fernández, music producer and artistic director of the most recent recording project by Niño de Elche, invites us to join him to listen to fragments from this double vinyl and will reveal some of the ins and outs of the creative process that brought it about.

After “Sí, a Miguel Hernández”, “Calle de Arriba, 73”, “Voces del extremo”, “Antología del cante flamenco heterodoxo” and “Colombiana”, Niño de Elche now undertakes an investigation into the audio archive of the Granada-born artist José Val del Omar (Granada, 1904-Madrid, 1982), whose particular sensitivity to listening – and, more specifically, towards the possibilities of flamenco subtly influenced by electronics – had already prompted a number of occasional approaches by the former flamenco singer. This listening session also coincides with the ZIN EX. From Abstraction to Algorithm exhibition, where we will find diverse work by the artist José Val del Omar.

This meeting in Tabakalera with Álvarez-Fernández – somewhere between a conference and a listening session – will cover the seven sections into which the work is divided and which are referred to in its subtitle. Attempting to provide a new perspective on the album’s process of composition, along with the extracts from it mentioned above, other audio material will be presented and discussed, in many cases from the audio “anarchive” of Val del Omar, as well as recordings by Niño de Elche. The different electronic manipulation procedures applied to these distinct sounds will also be shown and discussed, with the aim of emphasising not so much the technical aspect of these operations but, rather, their aesthetic implications, always connected with the artistic research process at the heart of all the work.