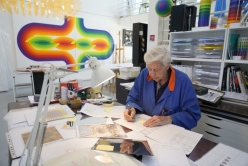 The artist Julio Le Parc, author of Kuboa will talk to the writer and researcher Ana Longoni

In this session, the artist Julio le Parc, author of the work Kuboa that presides over Tabakalera square, will be interviewed by the writer, researcher and professor Ana Longoni, current director of Public Activities at the Reina Sofia Museum. Le Parc is an artist who knew how to connect modern art with the uncertainties of the contemporary, and who was a pioneer in establishing a new relationship between art and its audiences. He stated that with his work he sought to establish a direct relationship with anyone who approached him, not only with art critics, since what was important was the complicity that could exist between the work and the spectator.

Kuboa, the mobile sculpture designed by Le Parc specifically for the Tabakalera square and composed of 2660 pieces, will be the starting point for a more in-depth look at the extensive production of the French-Argentinean artist.