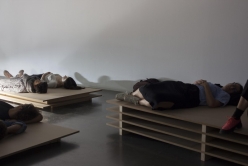 Setting of a Body that is Made Available for Writing

This proposal is directed and focused on the practice of writing. It takes place through an exercise of contrast, an activity where the public is invited to reflect on the set of systematic operations that make it possible to calculate and find the solution to different problems. Therefore, it is important to follow the set of defined rules step by step in order to carry out this activity. 29 Conditions for an imposition wants to draw attention to the -often unconscious- variables of the structure that generates all textual production. Writing is inconceivable without a choreography dimension which, despite its invisibility, is self-imposed by
the writer.  The installation is conceived as a mediation that in turn can be used as a meditation and which tests the idea that reflection does not stop action.

“The behaviour of human beings is firmly based on the self-image they have made for themselves. Accordingly, if one wishes to change one&#39;s behaviour, it will be necessary to change this image.” Moshe Feldenkrais.

For approximately 1 hour, one or two people seated at a table read the text 29 CONDITIONS FOR AN IMPOSITION while the audience lie down on platforms that allow them to place themselves at different heights above the ground and listen to the reading.