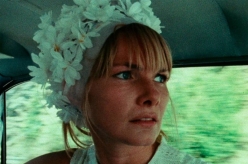 It is an invitation to contemplate moving bodies. Bodies sculpted or not by the passage of time, each totally different from the other, building a dance that speaks of love, desire, beauty, sex, fun and affection. Bodies that move feeling, vibrating and inhabiting the present. Textures, skins and rhythms breathing enjoyment in its own right and pure pleasure.

WANDA, the first and only feature film directed by Barbara Loden, is a masterpiece. An intimate drama that written, directed and starred by her that offers a heartbreaking portrait of a woman stranded on the fringes of society.

In the working area of the suburbs of Pennsylvania, Wanda Goronski wanders the streets, aimlessly. Since leaving her husband and losing custody of her children, she is alone and goes from bar to bar, from motel to motel. A series of men will take advantage of it and will end up in a criminal plot.