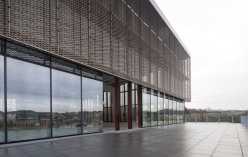 Tabakalera will open its doors after four years of works, reconverted into an international center for contemporary culture. To celebrate it, we have organised a series of special activities with artists, performances, music, exhibitions, visits, workshops and projections.

We are happy that we will be accompanied by a number of artists, such as Idoia Zabaleta and Nilo Gallego, together with Chus Domínguez, with their Orquestina de Pigmeos, Anna Manubens and Soledad Gutiérrez curators of the exhibition, Pablo Marte and Marion Cruza presenting the project they have developed with the workers of the former tobacco factory; Alex Mendizabal and Pierre Berthet with their sound installations; Cristina Lucas and Quim Pujol; Dora García and Roger Bernat; Manu Uranga and Isidora Valcárcel Medina; Nadia Barkarte, Anaïs Tuerlickx, Las Raras, Lyncoln Diniz and Rosa Casado with Mike Brookes.

We will also have a series of workshops and cinema for families, together with Muelle 3, Maushaus and Marc Vives, videogames, mending workshops, liv e coding sessions and How to make for makers in Hirikilabs. And if you want to be a dj for a day, this is your chance.

And this is only the beginning. We will be waiting for you.