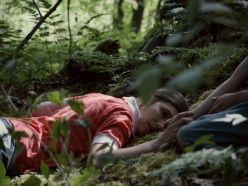 Greece, 1984. Kenneth, an Englishman, and Theres, a German girl, sing in the street to finance their holidays. They are in love, but when Kenneth learns that his mother had an accident, he hastily returns home, leaving Theres behind. Later, when he realises how much he needs her, he attempts to win her back.

30 years later in Berlin. Ariane, a 40-year-old TV actress, leaves her husband, a successful anthropologist, after a marital crisis. After moving into an apartment near the main station, the husband start seeing a homeless man outside his window. It is Kenneth, who does not know that Theres now also lives in Berlin.