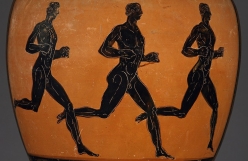 Over the course of the 5th century BC, Greek tragedy, as developed by poets such as Aeschylus, Sophocles, and Euripides, was able to provide its audiences with an audio and visual perception of epic ancestral myths. Friedrich Nietzsche's brilliant reflections in The Birth of Tragedy led this literary genre to be recognised as a vindicator of the darkest aspects of human existence and the irrationality that the political order tends to suppress. Without question, the exhibition of what is "civically reprehensible" provokes a manifest emotional response from the general public that is known in Aristotle's words as "catharsis". Now, passionate experiences in theatre were not excluded from the intellectual exercise: tragic poets returned to a popularly known mythological tradition to reflect on the new democratic city's ambiguous relationship with a past from which it arose, a past that it intends to surpass with a radically new socio-political system. While listening to tragic theatre's mythical figures from the past, Athenians of the classic age saw themselves.

Thinking with the body: cynics in the mirror of ancient philosophical tradition. Étienne Helmer (University of Puerto Rico).

The cynics of antiquity are famous for their scandalous attitudes, sharp words, total disdain for conventions, and their arrogance. However, only recalling these aspects would underestimate the decisive change in direction that they introduced into the history of philosophy: Diogenes and his epigones made logos descend to the body, incarnating reason after proving and demonstrating that the body, and not the abstract application of the soul, is that which philosophises. But how did this change in direction take place, and what is its meaning? Socrates, or at least the Socrates that Plato presents to us, accepts the idea that the body is an indication of the soul: in function of its expanse and the nature of its aims, its appetites indicate what type of soul the instrument is, and what fundamental type of life the performer represents. The more that this body is found to be subordinate to the desires that stream from the fountain of the soul, the better the body serves the soul by allowing its submission to thought. Other schools have also converted the limitation of appetites into the distinctive trait of their doctrine and their advocated way of life (for example, the Epicureans and the controlling of their desires). In all cases, the well thought out and properly experienced body remains submissive to the soul: the body supports the soul through ascesis, but the soul occupies the true place of the subject and is the home of reason. It is the soul that philosophises. Diogenes transforms this tradition by moving the soul's place to the body: it ceases to be at the service of a sovereign soul and becomes the place of truth itself. It is this body of truth, this characteristic body-philosopher of cynics, which I will attempt to present here by exploring how it thinks, what it says, and how it functions on an economic, ethical, and political level. It is a radical transformation of the relationship between human beings and the world.