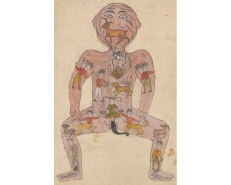 The second day will be dedicated to ancient India, which will be led by Silvia D’Intino, a Senior Researcher at the CNRS, and Ana Agud, Professor Emeritus of the University of Salamanca.

In the Indian speculative tradition, thought's relationship with the body is the subject of a wide range of reflections that run from the absolute counterpoise of thought and matter or corporeality, to their total identification. India's most popular philosophy, the Vedanta, denies the reality of any difference, as it claims that the only truth is the perfect unity of the being with itself, and this must imply the cancellation of any opposition between matter and spirit. However, Vedantists are actually dedicated spiritualists who attempt to relegate the material and corporeal to the negative space of obstacles for thought. From here, the inclination towards ascesis also arises. Nevertheless, Vedanta is combined very early on in a somewhat conflictive nature with another system of traditional thought, Samkhya, which arises precisely from a fundamental dualism between the material and the spirit. Although Samkhyadefends a cosmic evolution in which the material would end up fading away into the pure spirituality of Purusha, what is certain is that its cosmology contemplates intellectual or cognitive dimensions (intellect, self-consciousness, free will) as a part of a demonstration of the material, Prakrti. An old upanishadic idea also reappears in the Samkhya, according to which the elements of material existence derive or emanate from the senses of an intelligent being. Body, reality, and thought are thereby integrated in a complex manner that includes both monism and dualism, as well as a curious triadism of reality's components (three qualitative atoms whose perpetual recombination produces existing diversity). All of this contributes to the relationship between thought and body in India being contemplated in complex and prolific ways.

In the vast encyclopaedia of the Vedic religion known as the Brāhmaṇa, the exegesis of rituals often acquire a typical narrative tone that introduces a "mythological" explanation for the events carried out, as well as the words uttered in a sacrificial context. Among those who populate these tales, the Lord of Creatures known as Prajāpati occupies a central role. Prajāpati is always present, and at the same time, always about to disappear, a fragility that transforms Prajāpati into an especially endearing being. According to the definition offered by Sylvain Lévi in his La doctrine du sacrifice dans les Brâhmanas (1898), "God-Sacrifice" is both deified sacrifice, and the mastery of rituals, but his immortality and understanding is not constitutively associated with his being: the texts tell us that Prajāpati was half mortal and half immortal; and that he obtained sacred knowledge through experience. As is the case with other gods, Prajāpati's immortality is the result of a conquest: gods access this perfect state through extraordinary ascetic efforts, and their bodies are always found at the core of these tales. The episodes of Prajāpati's 'biography' demonstrate up to what point the bodies of gods coincide with their persona, and organise the narration: a body that is dismembered, displaced, scattered, emptied in creation and, later, through sacrifice, the strength of ritual acts, and words, found again, restored, and repaired. The body does not only exist before action, it is also an end to achieve in terms of design. These are the first drafts on the question of the body, on discourse surrounding the body that runs through the entire history of subsequent Indian philosophy and invites us to reflect more generally on the purpose of action and the human condition.