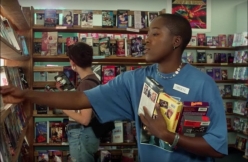 Presented by members of the Programming Group.

The Watermelon Woman has become a classic of feminist cinema. In 1996 Cheryl Dunye became the first African-American lesbian woman to direct a feature film and won the Teddy Award at the Berlinale. She is an essential figure of the New Queer Cinema.

But, who is the Watermelon Woman?

Cheryl, the main character of the film (played by the director), will ask the same question when in the credits of a Hollywood movie of the 40s, instead of the name of the African-American actress who plays the maid the only mention to her is "The Watermelon Woman". Cheryl, who works in a video store surrounded by VHS, will ask the same question again when she sees the credits of another movie where the same thing happens. Cheryl will decide to start researching on that nameless actress and turn that research into her own movie. Autobiography, documentary, fiction, humor, television, experimentation, social issues. There are some elements of Cheryl Dunye's cinema that could already be seen in her first short films called by herself as Dunyementaries. The director explained time ago that one of the things that pushed her to make movies was the willing to find on screen someone like her; and that, as is shown in The Watermelon Woman "sometimes you have to make your own story".

On the twentieth anniversary of the premiere of the film, in 2016, Outfest Legacy Project and UCLA Film & Television Archive restored a copy of the film and it was screened at the Castro Cinemas in San Francisco. Despite the fact that twenty years had passed since its creation, The Watermelon Woman was as groundbreaking as it was then.