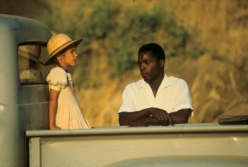 France's father explained to her that the horizon is a line that you can see but that does not exist. "You can see the line but, in reality, it does not exist" her father told. A father that was a French officer in Cameroon during the 50s. It was not until years later that France realized that besides that line that divides the sky and the earth, her childhood in Africa had been marked by many other dividing lines: Cameroonians and French, blacks and whites, servants and owners, women and men, children and adults. The colonial house were she lived her childhood was also divided by unprinted lines: while family members ate protected by the walls, Proteé, the servant, used to shower fully in sight. The public space and the private one. Who is looked at and who looks. The weak and the powerful. And going through all these words, Claire Denis' cinema which with the smallest gestures erases and at the same time makes visible each and every one of those divisions. The looks, silences and desires among the characters. Pure cinema full of secrets of life.
Claire Denis directed Chocolat, her first feature film, in 1988 and, it was inmediately selected to be part of the Official section of the Cannes festival. In this film, based on her own childhood, the director created, for the first time, images, sweats and furs that have been accompanying us during the retrospective that we have devoted to her during these months in Tabakalera. Chocolat ends with the skin of the little France turned into a woman: a man who picks her up on a road from Cameroon will ask her to show him her hand so that he can see the lines of her life but France does not have lines in her left hand (or past nor future). She only has the mark of a wound that is not completely healed. A scar forever.