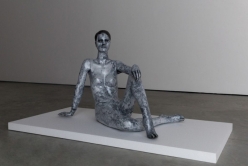 *The main language in this seminar will be English. Please fill the enrollment form.

Anke Dyes: When Being Good is Looking Good

In times increasingly fixated on ratings and rankings, a good result is one that looks good in numbers, as Steffen Mau states in his recent publication “Das metrische Wir”. One might add, that on social media, being good is in fact looking good, since the main form of interaction is making each other quantifiable in mutual likes, hearts and ratings. More so, this interaction is giving presence to otherwise unseen people, entities, handles, avatars. Interested in performativity as the practice of shifting the boundary between looking and being, between representing and making reality, I am going to speak about different examples of self-evaluation off- and online, of confessions and of coming-outs, and how those can be understood as performative in terms of identity and its truth.

The use of media imagery, especially that of particularly violent content has a long history in American pop art and its descendants. I’d like to entertain a thought that considers the moment in which Warhol and Noland passed the torch of the most iconographic depictions of the US-American obsession with violence as the very moment in which a shift took place that has had reverberations way beyond any expected scope and that could have easily shattered an artist’s subjectivity. the violence and its (medial) depiction might has changed less over the decades than the system with which it can only be aesthetically reflected.

While Warhol mirrored capitalism’s smooth ways of creating desire by inversion - a strategy that runs through his entire oeuvre - his persona could still hide in the shadow of the hyperplane. Noland found herself confronted with a different spatial set up. Flanked by her own analysis of society as one marked by methods of manipulation gearing towards the complete dissolution of a basic trust in the social standard of empathy, her objects and installations not only showed 1:1 models of scenes of implicit and explicit violence but turned out to be self-similar objects of the harm itself.

The lecture would consist of an analysis of key examples of Warhol’s and Noland’s works with the help of geometrical models. An additional series of photos taken in the aftermath of 2017’ G20 summit in Hamburg, brings the violence and its picture to our current time. Here, shattered windows (being perceived in the German media as either revolutionary gesture or plain vandalism depending on the political scope of the outlet) seem to enter a strange visual feedback loop: The holes in window planes of high street shops and banks and their emergency makeshift patch up created visually compelling imagery reminding strongly of Noland’s practice. With the window decorations, that lay behind the abstract images of acrylic glue and added material, where the glass front could not be restored, nameless glaziers and house technicians lived up to these iconic figures, allowing for the images to not only enter the circulation of art but also leave it again.

In the light of the recent right-wing political turn that is consuming a large part of Europe and more specifically the alarming public political shift in Austria, our artistic project, next to others, assumes the role of potential form of political activism within the current power struggle between irreconcilable world views and their corresponding political and societal projects. Due to the structural imbalance of forces, grassroots initiatives are limited to a reacting position. Struggling to undo recent attacks upon their organizations (cuts in the financial and other forms of public support, political marginalization and even de-legalisation) and fighting for the survival of their activities and for the maintenance of their structures and voices within the contemporary societal discourse, they are oft left with the feeling of always being one step behind, one moment too late. Stuck in the undeniable importance of the effort of undoing what is being done (from public statements that weaken the position of minorities within society to legislation reforms that undermine the welfare state), the moments when a projection into the future is made possible are as significant as they are rare.

Side by side with other strategies for catching up and gaining ground, exercises of political imagination, moving fast forward in a fictional timeline and of working with alternative imaginaries can be very useful in strengthening real time struggles.
Exercising Impossibility is a collaborative proposal by the artists Ana de Almeida and Alicja Rogalska to, next to the strategy of forming new alliances and creating intersectional solidarity networks, sets up an experimental, fictional and alternative framework for a heterogenous group of Vienna based feminist and queer-feminist artists and activists.

Exercising Impossibility is a co-written and context-specific Live Action Role Playing (LARP) game, based on research upon local political power relations and its recent developments. On one hand LARP draws from a long tradition of acting and reenacting towards promoting social and political change (such as for example Augusto Boal’s Theater of the Oppressed), on the other hand, as in a simulacrum or virtual reality, it makes a fictional framework possible: one that can start by in different ways subverting current power relations and everyday contingencies, creating a speculative environment for experimenting with real strategies for working against discrimination or, when working only with a set of game rules and notations can be taken to a high level of abstraction, providing a non-discursive action environment.

In the intersection of LARPing, art and political activism, the game is thought of possibly becoming a tool for developing collaborative resistance strategies and tactics.

Nina Kerschbaumer: I Am a Catwoman Because I Can

Imitating, reeanacting and performing. Along these and other terms describing the playful andperformative act of restaging, this paper analyses the phenomenon Cosplay (costume play), a fanpraxis originally from Japan and by now, enjoying a big community in Europe and the U.S., from an artists perspective. By wearing a coat of interdisciplinarity I read Cosplay as form of resistance and tool of empowerment of the so called „folk“. Authenticity with its controversial implications and repetition- or better: the copy are not that paradox here as it may seem at first glance. Furthermore I will seek for answers why social media platforms as a public, hence the image (Abbildung) is more effective than the performance itself concerning breaking up common narratives by repeating them, while wandering around forrests of representations wearing my fancy coat and my deleuzian shoe. Please don´t tell me who I am!

Crash Site / My_Never_Ending_Burial_Plot is the sixth episode in the serial-based project X Characters, which revolves around the attempt to update the identities of iconic female film characters. The productions realised (A Memory of the Players, 2001; Coming Attraction, 2002; X Characters/RE(hers)AL, 2003; X NaNa/Subroutine, 2004; X Love Scenes, 2007 and Cold Rehearsal, 2013, in collaboration with Christine Lang) are drafted as interdisciplinary projects, and investigate distinct forms of female identities in the context of contemporary art practices, while at the same time focusing on the history of cinematic and theatrical forms in conjunction with the role of New Media in the present day.

A new version of Hari of Andrej Tarkovsky's film Solaris encounters two other undead characters from film history: Godard's Nana (Vivre sa vie) and Antonionis's Giuliana (Il deserto rosso) who, following a sex change, has now become Julian. Lost in an abandoned forest clearing, the three characters attempt to come to terms with their past(s) as fictions: to "find their end", to "bury history", to kill themselves, to beat each other to death. The plot is organised around a burial that never comes to a close and so becomes an endless burial loop. The three characters are captured again and again in a present that repeats in variations.